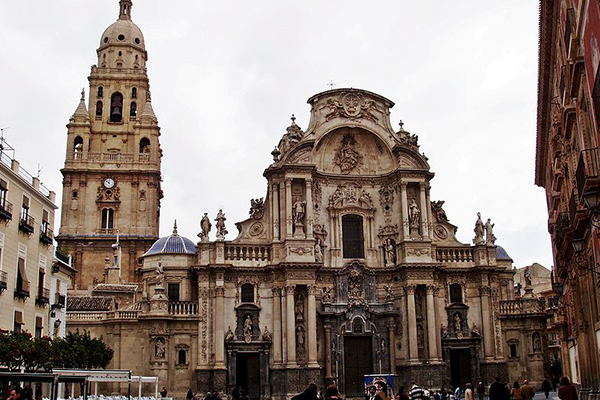 Spain’s seventh-largest city is big enough to capture your attention yet small enough to explore in a day. Murcia, therefore, is the perfect day trip. You can take the bus for a return ticket of only 10 euros and be there in about an hour.

Monuments like the cathedral and the sculptures of Francisco Salzillo need to be your first ports of call to see the best of Murcia’s culture.

The city’s cathedral has a big medley of architectural styles, but it’s the baroque additions in the 17th and 18th centuries that really catch the eye.

Easter Week in Murcia is particularly special, as the pasos (floats) that are carried in the city’s parades were sculpted by the feted Murcian artist Francisco Salzillo. He was active in the 18th century, and worked in the baroque style.

You can also step back even further to find traces of the city’s Moorish origins that are integrated into several of the city’s buildings, and on display at the city’s Archaeological Museum.

In the evenings venture onto the squares of the old centre with friends or loved ones for stand-up tapas. 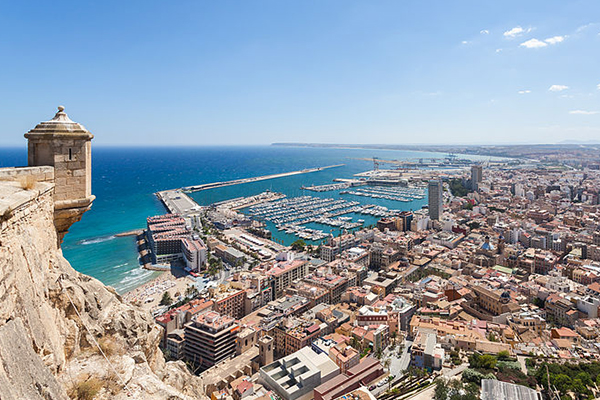 Alicante is a beautiful city, around 90 km from Cartagena, that you can visit in just one day. If you want to go to the beach, you could spend a few days there and make sure you’ve seen everything there is to see.

To get to Alicante you can take the train, which costs about 15 euros one way. The trip is around 2 hours long.

Once you are there, there are plenty of things to do. You can walk alongside the sea, there is a promenade with lots of little souvenir shops. You can see the port, visit the castle, wander around the older town. If you’re keen to spending more time in the sun, take the tram to go to the quieter beaches.

To get to the castle, you can choose to take the lift or you can walk up to it. From the top, there is a really beautiful view.

In the old town, there are lots of churches. The streets are pretty and the architecture is really beautiful. There are also lots of nice restaurants with good food for a good price. 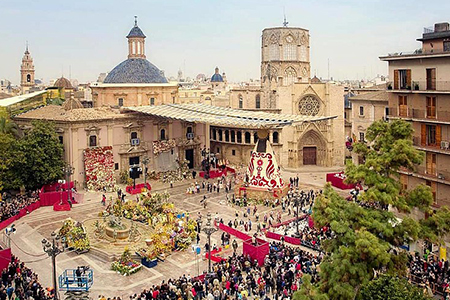 Valencia, the third largest city in Spain, offers a great combination of city, sun and beach, and plenty of cool things to do!

Valencia has a mix of old and new buildings, giving it a real special feel of its own. From medieval castles and towers to modernist and art deco architecture, from nice little shops to big shopping centers, Valencia has it all. And, of course, there are plenty of great places to eat and drink too.

Valencia is a city full of surprises! Did you know that Valencia has the largest inner city urban park in the whole of Europe? The famous Turia park, which used to be a river, is only one of five beautiful public parks in Valencia.

And did you know that the Holy Grail, the cup that Jesus is supposed to have drank from at the last supper, is said to be kept in the cathedral in central Valencia?

Explore that, and much more, with a 4-hour trip from Cartagena to Valencia for around 45 euros return ticket. 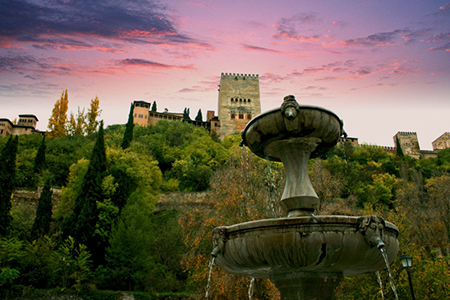 Granada is one of the most famous towns in Southern Spain and a must stop on any Andalusian itinerary, if only to visit the Alhambra palace. The scenic landscapes, Spanish charm and historical sites draw travelers in droves.

The highlight of any visit to Granada is the Alhambra. It’s a palace and fortress complex originally constructed as a small fortress in AD 889 on the remains of Roman fortifications, and then largely ignored until its ruins were renovated and rebuilt in the mid-13th century.

Once you’ve gotten your fill of the palace’s rich history, take a stroll in the picture-perfect alleyways of the Albaicín neighborhood or shop the Moroccan goods at the Alcaiceria near the Historic Center.

You’ll also want to take advantage of Granada’s close proximity to Sierra Nevada National Park, or indulge in one of the city’s Arab bath houses. And make sure to end at least one of your nights with a trip to Plaza de San Nicolas for unforgettable vistas.

Granada is about 4 hours away from Cartagena by bus and a return ticket costs around 55 euros. 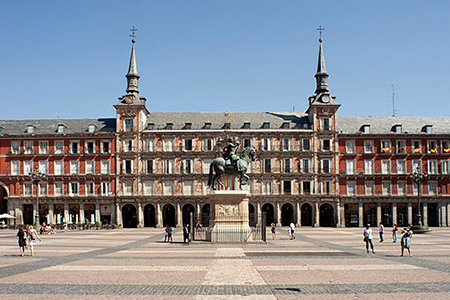 Madrid, Spain’s central capital, is a city of elegant boulevards and expansive, manicured parks such as the Buen Retiro.

It’s renowned for its rich repositories of European art, including the Prado Museum’s works by Goya, Velázquez and other Spanish masters.

The heart of old Hapsburg Madrid is the portico-lined Plaza Mayor, and nearby is the baroque Royal Palace and Armory, displaying historic weaponry.

Plaza Mayor, steeped in almost five centuries of history and tradition, is Madrid’s most famous square with its brick-red apartments, Flemish-style spires, and endless arcades—once played host to sporting events, bullfights, and even public executions.

The Museo del Prado, Spain’s most prestigious museum, houses some of the world’s most universally recognizable works of art from 12th- to 19th-century Europe

Travel from Cartagena to Madrid by train for a return ticket of under 60 euros. The trip takes about 4 and a half hours. 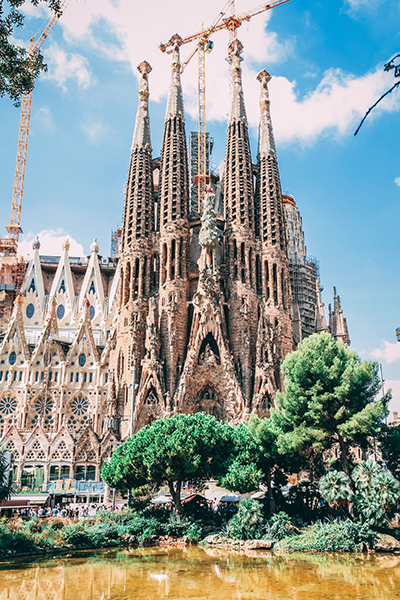 Barcelona, the cosmopolitan capital of Spain’s Catalonia region, is known for its art and architecture.

Barcelona’s most famous street, La Rambla, a nearly one-mile pedestrianised boulevard from Plaça Catalunya to Port Vell, is still the strolling route for the city’s visitors. Originally, the area consisted of five mini-ramblas: Rambla de Canaletes, Estudis, Sant Josep, Caputxins, and Santa Mònica. It has a charm that keeps the 78 million coming.

Make sure to visit La Sagrada Familia, Gaudí’s extraordinary temple dedicated to the Holy Family, otherwise known as the world’s largest unfinished church, whose latest projected end date is 2026. Be sure to book a ticket ahead so you can get inside and gawk at the vaults and rainbow stained glass.

Park Güell is an almost make-believe landscape: home to Barcelona’s famous mosaic lizard, the image on a thousand postcards, plus spiral towers that look like fairground slides. The city’s grandest park began life as a collaboration between entrepreneur Eusebi Güell (hence the park’s name) and Antoni Gaudí.

To reach Barcelona from Cartagena costs around 100 euros by bus (round trip) and it takes 10 hours, due to the fact that there’s more than 600 km distance. For 40 euros more you might consider buying a plane ticket from AirEuropa and cut down the travel duration down to 4 hours. 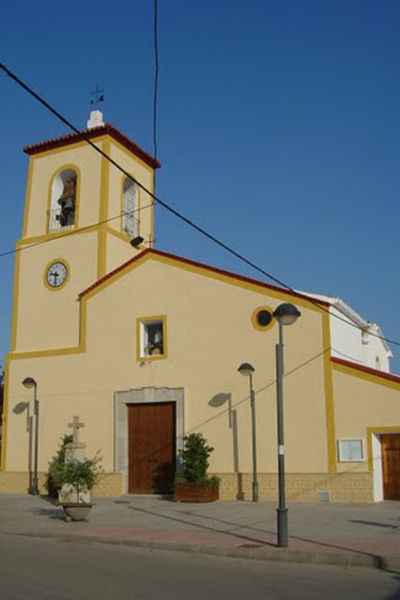 Although it’s a municipality, not a city, Torre-Pacheco is definitely worth the visit. Torre-Pacheco is a rural destination surrounded by farmland, windmills and important archaeological sites.

In the mountainous area of Cabezo Gordo lies one of the most important palaeoanthropological sites of the Spanish Mediterranean Sea, known as “La Sima de las Palomas”. More than 50,000 years ago the Neanderthal man walked these hillsides. The amazing site and the breathtaking views of the Mar Menor from the top are waiting for you!

Torre-Pacheco has been a land of giants for more than six centuries. If you want to do the Windmill Route you’ll be allowed to go inside them, visit the chambers and relive the history of these large gadgets that were a key part of the local economy and remain part of its landscape today. Visit El Pasico Windmill, located next to the hermitage of the same name.

One of the most original, straightforward ways to get to know Torre-Pacheco is to wander through its streets where you’ll find contemporary works of art. The Ícaro Hídrico (Water Icarus), Menina Minotaurina (Lady in waiting), the mural de Las Aguas (mural of Waters), Puerta al Futuro (Door to the future), and the mural Cabezo Efímero (ephemeral hill mural) are some examples of these urban jewels.

The best thing is that Torre-Pacheco is a distance of only 15 km from Cartagena and you can easily find busses or trains for a return ticket of 10 euros or less. You’ll be there in 10-15 mins!

I came to the UPCT to study International Business. Since I arrived, I’ve made a lot of friends to travel
with! From Cartagena you can easily reach many other Spanish cities like Granada, Seville, Cordoba, Madrid or Valencia…